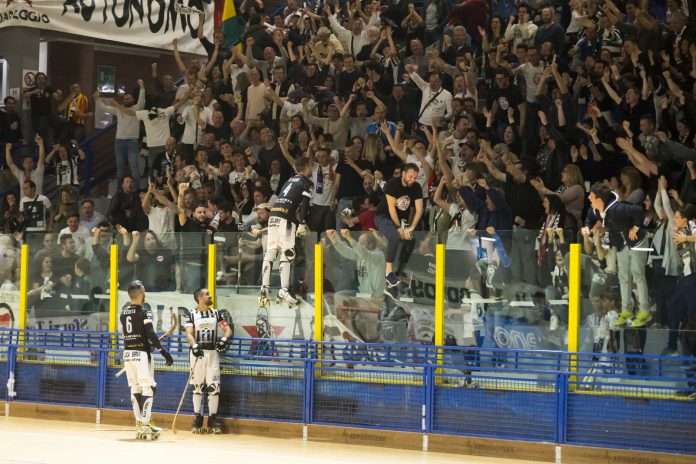 CGC Viareggio – OC Barcelos is the final of the Cers Cup

The defending champion OC Barcelos and the host team CGC Viareggio will be the protagonists of the final game of the Cers Cup ongoing in the Italian city of Viareggio.
On the rink of the “PalaBarsacchi”, the Portuguese team conquered the final for the second year in a row and will defend the cup won twelve months ago in its own venue. Opposite to the Italian team of Hockey Sarzana, Barcelos had some difficulties during the first half when suffered a 2′ expulsion during which Sarzana wasn’t able to score. Reinaldo Ventura, the most representative player of OC Barcelos, gave the decisive impulse scoring the first advantage of Barcelos on a penalty and then, few seconds after the draw of Sarzana, the second score on a killing shot. In the second half, Barcelos scored again after few seconds (3-1) thanks to Vieira, then controlled the match till the end, saving as many energies as possible for the final fo tomorrow.
In the second match of the day, CGC Viareggio won 2-0 against the Spanish team CH Caldes. Even this second semifinal has been very balanced because the home team wasn’t able to close the match after having scored during the first half with a shot of Gavioli decisively deviated by Costa. In the second half, Viareggio misspent a direct shot and 2′ minutes of power play caused by the 2′ expulsion of Paul Galbas. Both the teams wasted their 10th fault’s direct shot: first Viareggio, then Caldes with only 5 minutes to play. Near the end of the match, Xavi Rubio struggled and recovered a ball in the middle of the rink and run alone in counterattack scoring the second point for Viareggio that closed the match.
The finale of the Cers Cup between CGC Viareggio and OC Barcelos is scheduled on tomorrow, Sunday April 30, from 8.00 PM CET and will be live on CERH TV, RTP2 and RTP international.