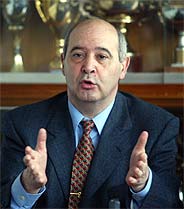 Born in La Coruna in 1947, he was President in 2004 and 2005 of Real Federación Española de Patinaje (Spanish Skating’s Federation) and for more than 30 years President of Federación Gallega de Patinaje (Galician Skating’s Federation). From 2008 to 2012, he was a member of Comittee Europeenne Rink Hockey, and in last years he made some collaborations with our refeeree’s sector.

The Comittee Europeenne de Roller Skating would like to express our sincere condolences to his family.