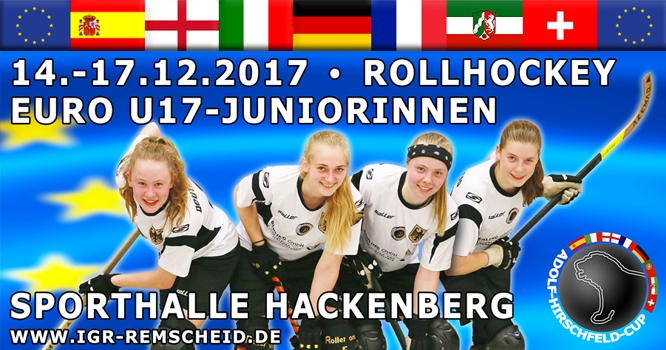 Saturday have finished the first part of the European Rink Hockey’s Season. The second part will start 13th January 2018 with the 4th Matchday of Euroleague and the 2nd Leg of Cers Cup. The 20th January, the first game of the quartersfinal of Female League Cup, that will determinate, at the end of February the four teams that will play the first Final Four, in the end of March, 17-18 March 2018. In February will be played the Quartersfinal of CERS CUP; with the final four in early spring 28-29 April. 23rd March the quartersfinal of Euroleague and then 12th and 13th of May the last Final Four.

Before all of this great season with european rink hockey, from this thursday will be played in Germany the 4th European Championship Under 17 Female reserved to the clubs, called Adolf Hirschfeld Cup.. Also this year will be played from 9 teams from all over Europe. 3 spanish team (Mataro, Cerdanyola and Plegamans) 2 german teams (Eagle Team and NRW-Auswahl) 1 italian team (Breganze), 1 suisse team (Projekt 2020), 1 english team (English team) and 1 french team (Wasquehal). Thursday and Friday the qualification round with 3 groups. Saturday and Sunday the second phase, where all the teams will play for the final standings, divided in 3 groups.

CERS-RinkHockey will follow as always the entire tournament with photos, videos and results from Sporthalle Hackenberg in Remscheid. In the homepage of the website you will find all the information for watching Hirschfeld Cup.