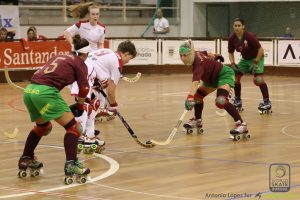 Good debut for Portugal, Spain and Italy in the 14th Female European Championship in Mealhada. They reach the first victory in the first matchday. Portugal wins against England for 13-2, Spain 6-1 against France and Italy 3-0 against Switzerland. Tomorrow from 9.30 Spain will play against Switzerland and in the evening at 19.00 the second match against Italy. France will meet England (17.00h) and Portugal will meet Germany (h 21.00 local time)

Good first victory for Italy. The italians ladies has beaten the Switzerland for 3 goals of Giulia Galeassi, Italian’s Captain. Decisive the double goals in the first period of Galeassi in few minutes at 8′ and 11′. Suisse team tried to reduce opponents attacks with a square defense but Italy grew up the score at minute 9 in the second half. Tomorrow Switzerland and Italy will play against Spain, first in the morning, second in the evening.

Spain won the first game of the tournament against France. Great defense in the first half for France that has reduced the score of the opposite team. The spanish team scores two goals at minute 10 with Puigdueta and Casarramona, but they tried many times to grow up the score. In the second period, Michoud-Godard, French’s goalkeeper, has the best against the spanish ladies, but at minute 11 Spain scored the third with Busquets. The spanish number 8, scores again after 2 minutes, the decisive break of 4-0. At 13′ France has scored the first goal with Paredes after a penalty shot. In the latest minutes Lee and Sara Gonzales scored the fifth and sixth goal. Tomorrow 2 games for Spain at morning with Switzerland and in the evening Italy. France instead will play against England.

Great debut for Portugal in first game in the Euro Female. 6-1 and 7-1 the scores of the two period of the third game. An easy victory for home team against a young team at the first international event. Four goals for Marlene Sousa, top scorer of the game, 3 goals Maria Silva, 2 for Ferreira and Ines Vieira, one for Balonas and Moncovio. Tomorrow the portugheses will play the last game at 21.00 against Germany.