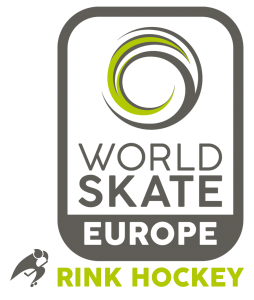 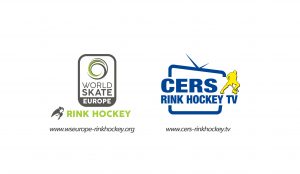 The upcoming Male Senior European Championship will mark the opening of a new era for our official media: website and web TV
The last September in Nanjing, the International Federation of Roller Sports changed its name in “World Skate”. Now, all the continental confederations are doing the same and Cers become “World Skate Europe”.

From now on, all the continental events of rink hockey will be under control of the World Skate Europe Rink Hockey Commission and the new website will be www.wseurope-rinkhockey.org.
The new website is already online with all the information about the 53rd edition of the Male Senior European Championship, scheduled from July 14th to 22nd in A Coruña (Spain).

The European Championship Coruña 2018 will also mark the debut of our new web TV. You can find it online at www.cers-rinkhockey.tv
The new television will start broadcasting every game played in A Coruña and will soon become the heart of European rink hockey TV production. The new TV platform will broadcast not only the games of the European Championship (Sub 17, Sub 20 and senior female) but also a wide variety of Eurocups game and other relevant events.

Spain wins the 18th European Title. 2-1 the result of the Final

Spain-France, the final for the title. Portugal-Italy for the bronze.