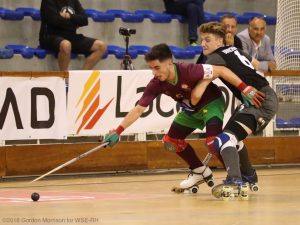 The 51st edition of European Championship Under 20 starts with three victory of Italy, Spain and Portugal. Italy won for 10-1 against England, after the first period of 5-0. Double goals in this match from Compagno, Rosi and Galimberti. 12 to 2 the score of the second match of the first matchday, Spain beated Switzerland. Easy victory for 6-0 in 1st half, 6-2 in the last part of the game, thanks to three goals of the FC Barcelona’s player Alejandro Joseph. More exiciting the last match of the first matchday after the opening cerimony at Pavilhao Monserrate de Viana, culminated with the official opening of the european championship from the President of World Skate Europe, Mr. Fernando Claro. Portugal won 8-0 after a tough match against Germany, team with the strongest defense saw in this first day. Germans missed 2 direct shot in the best moment of the game, instead Portugal centered others 2 decisive goals in the start of the second half. Five, as the excelent goals of Hugo Santos, best scorer of the EuroU20. Tomorrow from 17.00 h (18.00 CET) the second matchday with the match clou Germany against Spain at 19.00 h. Portugall will play against England and Italy against Switzerland. All the matches will be broadcasted live in our WebTV www.cers-rinkhockey.tv, where you can find all the highlights of the matches, and livescoring in our website www.wseurope-rinkhockey.org.