The 51st edition of European Championship Under 20 is ready to start in Viana do Castelo for the first time. Last edition in Pully (Switzerland) has won Portugal against Italy in a tough match, scored for 3 to 1: in that occasion third place for Spain, fourth for France. Portugal wins uninterruptedly since 2008: 10 years through edition played in Germany, Italy, France, Portugal (Valongo) and Switzerland. Latest edition without portuguese’s victory was 2006 in Saint Omer (Spain’s victory). Latest Italy’s victory was dated 1991 in Blanes.  In last 5 editions 3 second places for Spain, 2 for Italy.

The 51edition will be played in Pavilhao Municipal e Desportivo de Monserrate (1900 seats), with a rink of 40×20 m in parquet floor. Portuguese Federation (FPP) will organize this event that will consist in six teams, England, Germany, Italy, Portugal, Spain and Switzerland. The opening cerimony will be hold at 20.00 in Pavilhao de Monserrate, and then will be played the third match with the debut of the home team against Germany. Five days of matches in a round robin with three games every day (17, 19, 21 hours). Saturday the final day with the finals: at 21.00 the final for the title, the first of the group against the second of the group.

All the 18 matches will be broadcasted live on our NEW WEBTV (www.cers-rinkhockey.tv) with the commentary of Jose Santos, Susana Pandavenes and Stefano Zamperin. The coverage will be extended, in final phase, with live interviews after the match with the coaches. The TV Producers for CERSRH.TV will be Pedro Cabral and Bruno Soares from Azores (aka Hoqueipatins.pt), a great professional service for rinkhockey, already producers of U20 2016 and of U16 2017, and others.

The final of European Championship Under 20 will be broadcasted live on RTP1, first channel of Portoguese Television.

WSE-RH will follow entirely the 51st edition with a special coverage in social network and in the section of Euro U20 www.wseurope-rinkhockey.org/eurou20 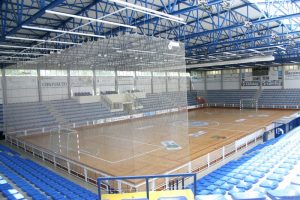