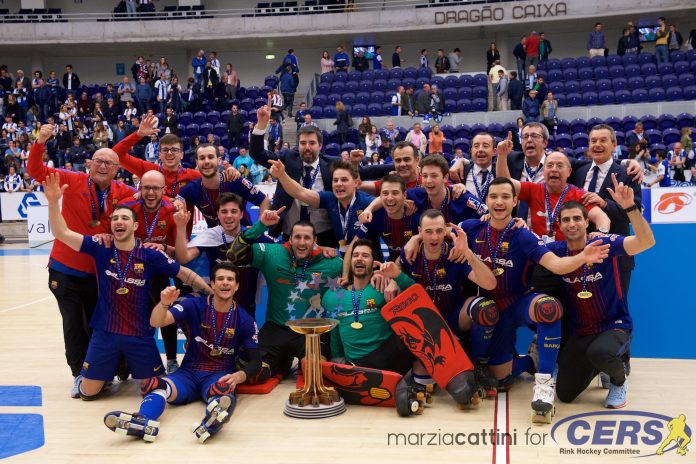 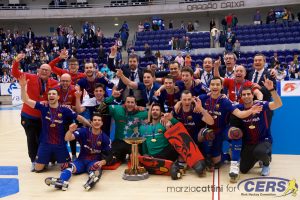 The Final Four of the Male Euroleague gives the 22nd title to FC Barcelona that prevailed 4-2 against the home team, FC Porto.
The last game of the Final Four has been extremely balanced in the first half, ended with the Catalan team ahead 1-0 thanks to the goal by Lucas Ordonez. An almost perfect defense and the saves of Aitor Egurrola didn’t allow FC Porto to score.
At the beginning of the 2nd half, FC Barcelona increased its advantage scoring twice with Pablo Alvarez and Pau Bargallo, but Porto didn’t surrender. Goncalo Alves took advantage of a direct hit and three minutes later Helder Nunes scored the 3-2 with a precise and violent hit from 20 meters. With 15′ still to play, the last part of the game has been balanced and amazing. FC Porto had many opportunities to score, but the attacks didn’t have effectiveness and, on many occasions, Egurrola saved is team. FC Barcelona closed the game in the last minutes thanks to direct hit scored by Bargallo.
With this title, FC Barcelona gathers 22 edition of the Euroleague (considering its different names during the 52 editions) and Aitor Egurrola reaches its 66th personal triumph in a unique career. For FC Porto, the Male Euroleague remains a kind of damnation: since the last victory in 1990, this is the 8th time that the Portuguese team loses a Final.

Download some pictures of the games of the Male Euroleague F4 from this link. All the pictures are free to use citing the author (Marzia Cattini for Cers-RH).
View the video of the games, the highlights, the interview and press conferences of today following this link.
View livescore and official match report in this page.