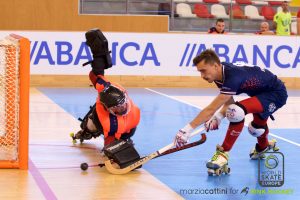 After three complete rounds of the group stage, the standings of group A and B begin to indicate the role that most of the teams will play in the second part of the 53rd European Championship of rink hockey which is ongoing in A Coruña (Spain).

GROUP A
Spain and Italy will probably play for the first two places in this group. Both the teams won their third game on a row tonight and lead the standing together with full points.
Spain had the toughest game to win and did it very well against Germany, 3rd in the ranking by now. The home team closed the first half 5-1 ahead and the final result was 7-1.
It was much easier for Italy to defeat the Netherlands due to the technical differences between the two teams. Italy won 15-4, but in the first half (4-1) Netherland make it difficult to tthe “Azzurri”.
In the first game of the day, England conquered its first three points winning against Belgium 14-2. This lets Amaral’s team play for the third place of the group: the head-to-head game against Germany, scheduled on Thursday, will be decisive.

GROUP B
Portugal rested today and this gave to France the opportunity to reach the top of the standing. The French team had no problems against Austria and the final result was 14-3.
The most balanced game of the day (and, until now, of the whole championship) was the one between Andorra and Switzerland. The guys from the Pyrenean Principality recovered twice and prevailed 3-2 and the end of an amazing game. This result gives Andorra a great advantage in the run for the third place of the group.