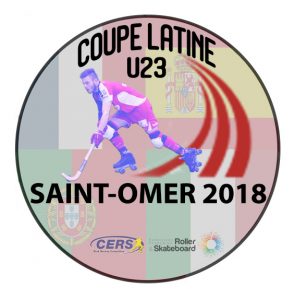 For third time in 28 edition, the Latin Cup will be played in France. The first edition in 1956 was played in Paris and in 1960 was in Nantes. After 58 years, the Latin Cup return in France: Saint-Omer. Saint-Omer is a rinkhockey historical place since 1932 with the name of SCRA Skating Club de la région audomaroise. The host club (SCRA Saint-Omer) have played many years in european competitions, especially Cers Cup, and in its history won 8 french championship (N1) and 4 France Cup. France Team never won a Latin Cup and it has reached only the third positions in 4 times in 28 edition. Now with the great french crowd expected in Salle Du Brockus, the French team of the coach Fabien Savreux wants to reach the top of the competition. Italy won only 3 editions in 27 played, Spain won 11 editions and Portugal 13. In last edition in Follonica (Italy), Portugal won ahead Italy, Spain and France. The competition will be played in 25+25 minutes games and in case of a draw, the match will ended with a 3 direct shot for each team for determinating final classification in case of equal points and goal averages.

Salle des Sport du Brockus has a capacity of 800 spectators, with a rink of 19×38 m in synthetic floor. The entrance ticket will be 15€ for adults and 10€ for children for each matchday (information from organization). For make a reservationvwrite an email to coupelatine2018@gmail.com.

All the six matches will be broadcasted live in YOUTUBE by our channel CERHTV (www.youtube.com/cerhtv) with the commentary of Stefano Zamperin, Press of Cers-rinkhockey. The coverage will be extended with live interviews after the match with the coaches and players

CERS-RH will follow entirely final four with a special coverage of press team in social network and in the section of Latin Cup www.wseurope-rinkhockey.org/latincupu23