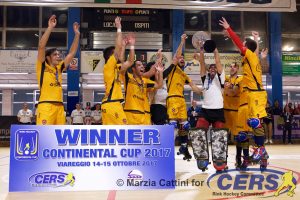 UD Oliveirense won the first European Cup of the season this night in Viareggio (Italy) at the end of the Final Four of the Continental Cup. After having defeated OC Barcelos yesterday night in the semifinal, the team coached by To Neves won 7-4 against Reus Deportivo in the final match of the competition.
Oliverense-Reus was the repetition of the last Euroleague Final; last may in Lleida, the Spanish team prevailed, but tonight the victory of Oliveirense was clear. The Portuguese team closed the first half two points ahead thanks to the goals scored by Souto, Selva and Cancela, while Casanovas temporarily tied 1-1.
In the opening of the second half, Oliveirense scored again with Barreiros. Reus reacted to this situation and tried to recover the match for three times thanks to Salvat, Rodriguez and Casanovas, but Oliveirense always kept its advantage until the end with the goals of Souto and Moreira (twice).
The Continental Cup is the first trophy assigned in the 2017/18 season. Starting from November 4th, 63 teams will play in a new, amazing European Cup season.
RESULT OF THE FINAL (Sun. Oct 15th)
Reus Deportiu vs UD Oliveirese 4-7 (live score – match report – video – pictures)RESULTS OF THE SEMIFINALS (Sat. Oct. 14th)
OC Barcelos – UD Oliveirense 2-4 (live score – match report – video – pictures)
Reus Deportiu – CGC Viareggio 2-1 (live score – match report – video – pictures)OFFICIAL HASHTAG
#okcontinentalFind results, videos, pictures, match reports in Cers Rink Hockey website and social networks account:
Website: www.cers-rinkhockey.eu
Youtube channel: https://www.youtube.com/cerhtv
Facebook page: https://www.facebook.com/CerhComite/
Twitter: https://twitter.com/CersRinkHockey
Instagram: http://www.instagram.com/cersrinkhockey