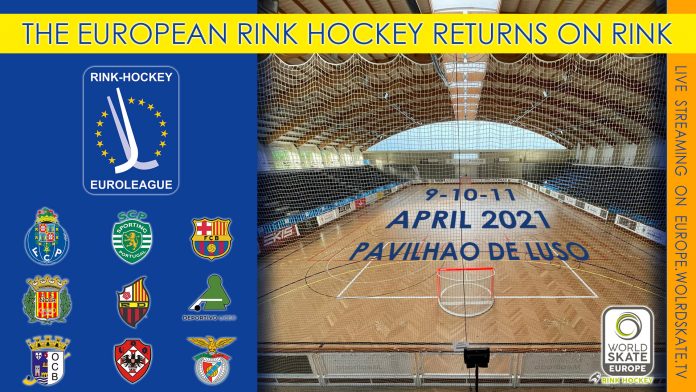 The “Pavilhao Gimnodesportivo de Luso”, in the region of Aveiro in the north of Portugal, will host the Euroleague 1st Phase of the season 2020-21.

Rink hockey will return 405 days after the last game played and returns to Luso after the Under-17 European Championship (2015) and in the municipality of Mealhada after the Female European Championship in 2019. Already home to Taça 1947, the first and only cup event so far in Europe during the Covid-19 pandemic organized by the Portuguese Federation, Luso will be the scene of a compressed qualification in just three days. All the protocols to fight the Covid-19 pandemic have already been established in October, before the restart of the competitions then blocked in November for the advance of the pandemic throughout the continent, and then updated in February to regulate the called “bubbles”, which will be scrupulously followed in this first European event, to which will be added to those established by Portuguese government regulations.

“I am very pleased as President of the World Skate Europe Technical Committee of the presentation of the organization of the nine clubs participating in this competition – declares Agostinho Silva. It is a very difficult time because of the pandemic for the whole of Europe, but everything will take place in compliance with an impressive health protocol as required by the provisions. The competition will not have an audience but will be broadcast on screens all over the world”

On Wednesday, Thursday and Friday there will be rink training of the nine teams. On Friday 9th April at 2 pm (local time) the first match between Porto and Noia will be played and then closed after nine games, Sunday 11th April at 20:00 with Benfica-Barca. All competitions will be broadcast on television (the  broadcasters will be communicated later) and live streaming on the new World Skate Europe Web Television (http://europe.worldskate.tv/).
The date and time of the coaches’ press conference will be communicated as soon as possible and the path of press accreditation will begin on Monday with a special communication.
All the information can be found on www.wseurope-rinkhockey.org/euroleague