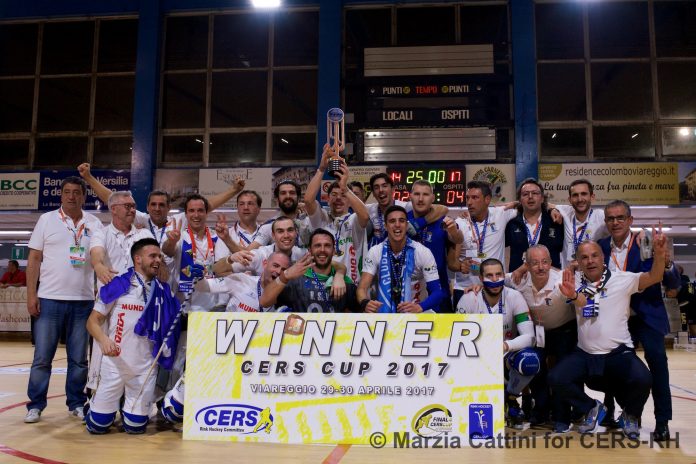 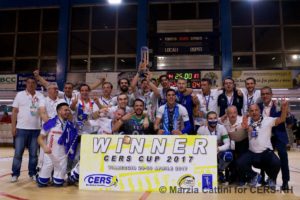 The Cers Cup remains in Barcelos. The Portuguese team won the Final Four again for the second time in a row defeating the home team CGC Viareggio 4-2 after an amazing and balanced match. In front of 1.500 spectators, with a significant and noisy representative of Portuguese supporters, the defending champion performed a comeback on CGC Viareggio, scoring the decisive goals in the second half.
Viareggio went ahead at the beginning of the match with a penalty scored by Xavi Costa. A few seconds later, Montigel got the first blue card of the match, but Barozzi saved on Morais’s direct shot. With 9′ to go, the referees showed a second blue card to Gavioli, but Ventura missed the cage on the consequent shot. In the first few seconds of the 2′ minutes power play, Guimaraes scored the goal of the 1-1 with which the first half ended.
Viareggio made its 10th foul in less than two minutes, but Barozzi saved twice on Morais’s direct shots keeping the match perfectly balanced. Two minutes later, Hugo Costa scored the advantage for Barcelos, with Viareggio’s players protesting for an unseen foul. Barcelos had its first occasion to close the match when Montigel got its second blue card, but once again Barozzi saved the direct shot by Querido. During the power play, Barcelos made its 10th foul, but Muglia didn’t score the direct shot. With all the player more and more tense, Ventura got a 2′ suspension due to protests against the referees, but Viareggio wasn’t able to tie the match. While Viareggio pressed to find the 2-2, a counterattack of Barcelos lead to the 3rd goal of the Portuguese. This wasn’t enough to lead Viareggio to surrender. The Italian’s leader Mirko Bertolucci scored the direct shot for the 15th foul of Barcelos making the last 8 minute an assault to Barcelo’s cage.
In the last minutes, the Portuguese goalkeeper Silva had a lot of work to do and succeeded in keeping its cage unbeaten. At the last minute, Rubio got the last blue card of the night and Vieira scored the definitive 4-2 giving the 2017 Cers Cup to Barcelos.
Click here to see the live score of the Final