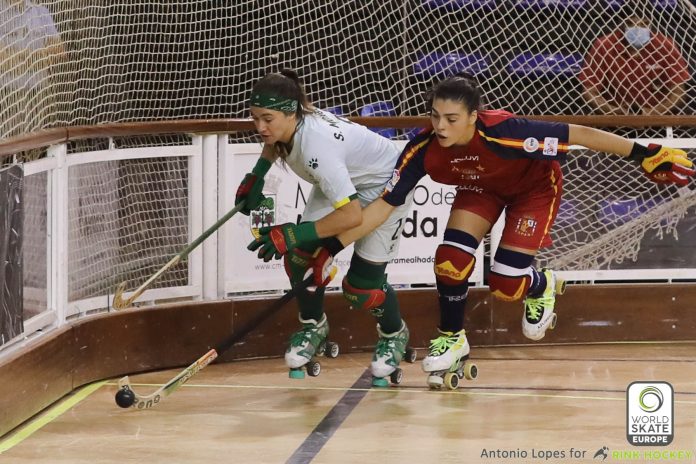 In the first game, France secured its presence in the Final 3rd-4th place by bending England 4-2. A balanced game where the difference was made by the expert Vanessa Daribo, able to score three goals; the fourth goal French was scored by Riou. England hit two bars before scoring a goal, but also found a second with Megan Todd. Portugal-Spain was also very balanced, a taste of Saturday’s final. 1-1 after the first half and after the end of the match with the goals of Casarramona (Spain) and the young Raquel Santos for home team, supported to almost 500 people in the stands. In the 2nd half, Ferreira did not pass the goalkeeper Ferrer in a direct shot but there are many occasions when the two goalkeepers have made the difference. The balance was maintained throughout the match with several occasions on both sides. At the last minute thrill for Spain, when the goalkeeper lands an opponent: from the penalty shot, however, Ana Catarina fails to score the goal of the game.
Tomorrow two decisive matches for the final classification and the definition of the two finals on Saturday. Spain against France at 17:30 GMT (18:30 CET) and Italy-England at 20:00 GMT, 21:00 CET. All the matches will be broadcasted live through europe.worldskate.tv and for Portugal tv.fpp.pt, for Spain feptv.es and for Italy hockeypista.fisrtv.it and Satellite Free to Air MS Channel (FTA Hotbird).

LIVE COVERAGE
The WEBTV of World Skate Europe. will be broadcasted by http://europe.worldskate.tv with the portuguese voice of Josè Santos. The TV production is assigned to the crew of Hoqueipatins.pt, Pedro Cabral and Bruno Soares with their 8 cameras in entire the rink. After every match will be broadcasted live also the press conferences in the same feed of the game. The live events will be streamed also by the Portuguese Federation ( tv.fpp.pt) Spanish Federation ( feptv.es ) and Italian Federation ( hockeypista.fisrtv.it ). For Italy, matches can be viewed through the satellite channel MS Channel (FTA Hotbird 13°E) and cable tv MS Sport.
After the matches, you will find the Highlight, complete matches and press conference in our WebTV and also in our new Youtube Channel https://www.youtube.com/c/EURORINKHOCKEYTV