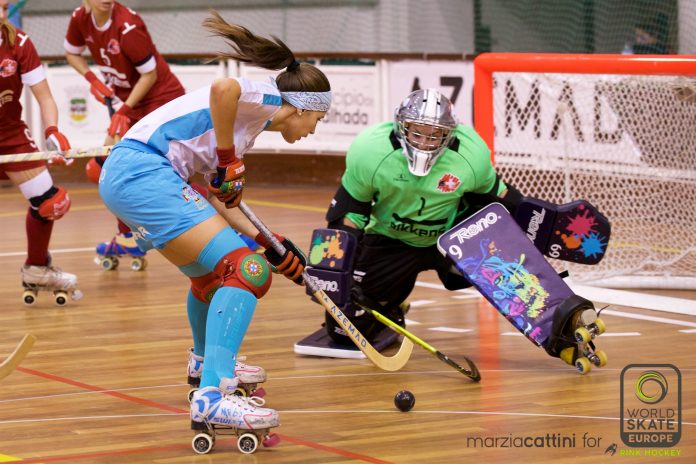 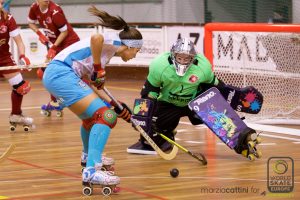 Portugal-Spain will decide the winner of 14th edition of EuroFemale. Italy conquers the bronze after the amazing match against France with the last goal scored in last 35 seconds to go. Portugal and Spain win in their match for 8-0 and 10-2.
Tomorrow Portugal-Spain, will be transmitted Live on TV, on the first channel of Portugal, RTP1, at 21.00 (local time) and also in RTPinternational and RTPafrica. The same match will be live on Mediasport Channel in Italian Satellite channel and in our webTV, www.cers-rinkhockey.tv: Before of that France-Switzerland (17.00h CET) and Germany-England (19.00h CET).

Italy won against France 3-2 at 35 seconds to the end of the game and conquered their third consecutive bronze medal. An incredible epilogue in the last three minutes after an equal game. 1-0 has scored by Galeassi after a preciuos assist of Tamiozzo at minute 10. Then France reached the draw at the last minute of first half with a shot of Laboyrie. In the second half, France grew the rhythm and Italy suffered many shots. At 22 minute, France centered the advantage thanks a tapin goal of Paredes. France seemed to gain the victory, but after few seconds, Lapolla drawed again for the 2-2. Italy has needed to reach the victory for conquer the bronze medal and in the latest seconds the italian girls found an incredible goal with Galeassi, thanks also to an autogoal of Malard for the final 3-2. France tomorrow will play against Switzerland for the fourth place.

As against Italy, Spain had some difficults in the firsts 15 minutes to score, caused by the intense defense of the opponent team. In the last 10 minute of first half, Spain scored 4 goals with Puigdueta, Piqueiro, Lee and Busquets. Germany scored the first goal with captain Wichardt at minute 1. After the 5-1, a long monologue in attack for the spanish team: they centered other 6 goals. Best scorer of the game Laura Puigdueta with 3 goals, 2 for Lee. Tomorrow the most important game for Spain, the match of the title: spanish need a draw to win the Eurofemale.

Portugal won the fifth victory in a row, after a solid victory against Switzerland. The suisse team has shown one of the best first half of their tournament and blocked the opponent team with the result of 1 to 0, scored by Ana Ferreira. In the second half the portoguese team of coach Pires grew up their score thanks to a most dinamic attack until the final results of 8-0. The counter of the goals, 3 goals for Ferreira and Sousa, 2 for Silva. Tomorrow the big game against Spain at 21.00 (local time) and for Switzerland  the last game against France.