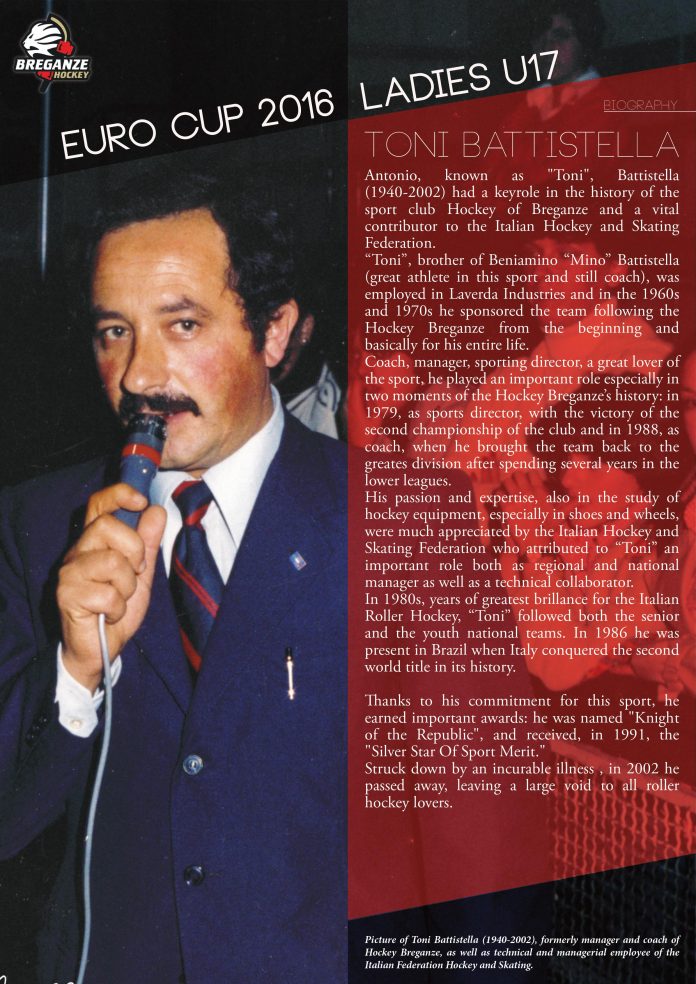 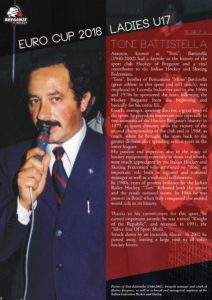 The Hockey Breganze is a club that believes in the potential of this sport and is convinced that it should be followed and developed the most of the components.

Here then investment, carefully and rationality, to prepare a first team that is able to play well and to fight in the top positions of the maximum Italian championship, a youth academy which devote attention and significant resources, including for the training of technicians and athletes, and a women’s sector that the property wants to be an integral part of the club, because this sport can and should be practiced by women.

All in accordance with the tradition of those who have made the history of Hockey Breganze.

Here then, 15 to 18 December next, the “Toni Battistella Cup” International Youth Tournament for girls U-17 category, dedicated to the memory of Toni Battistella (1940-2002), a key presence in the Hockey Breganze and an important collaborator of the Italian Hockey and skating Federation.

It ‘an event that the Comité Européen de Rink-Hockey-Rink Hockey Committee, the organ that manages European competitions of this sport has strongly supported, because its leaders are strongly convinced that the rink hockey should enhance its female component, starting with athletes younger.

And this is the third edition of the tournament, for the first time in Italy and for the first time dedicated to the figure of Antonio (Toni) Battistella, the Beniamino’s (“Mino”) brother. Mino,  based in Novara, was a great rink hockey champion and is a famous coach and he announced, with enthusiasm, his presence at the competition days. Toni was an important coach and manager, both for the Hockey Breganze and for the Italian Hockey and Skating Association and it was a duty to remember him, although many fans of this sport do not have certainly forgotten him.

Nine teams, divided into three groups, will take part in this international tournament and they will come from England, Switzerland, Germany, Portugal, Spain and of course from Italy.

Three the announced Spanish formations, where the women’s rink hockey is much appreciated. No coincidence that Spain won both the world championship for the European Championship and there play some of the strongest Italian athletes, such as from Breganze Erika Ghirardello, Elena Tamiozzo from Trissino, Giulia Galeassi from Viareggio. Before going to Spain they won the Italian Cup and the Italian championship in 2016. Their example has been followed because even this year have started practicing this discipline the young girls, playing and having fun with their male teammates, in the sign of a tradition that continues.

Speaking of Italian teams in this tournament will take part the Matera and of course, the Breganze, with an enthusiastic Juan Oviedo (world champion in 1999 with Argentina, goalkeeper in the team of Monza, in the Italian A1 league, and coach the youth of Rollersport Valdagno) to technical guide, with the fundamental contribution of Maddalena Castello, national coordinator of the female sector of this sport.

In Italy the women’s sector, practiced and followed in the late eighties and mid-nineties, in crisis in the second half of the year two thousand is broken down and fortunately since 2012, after several years of stop, girls play the championship and Italian national has returned to participate in the highest competitions.

Of course it is necessary to grow the number of athletes practitioners and clubs, but the road taken is the right one, especially from the technical point of view, as confirmed by the two third of the Italian team to the Europeans of 2013 and 2015, and essentially even good placings at the world Cup in 2014, sixth place, and 2016, seventh.

The team Female Hockey Breganze, strongly desired and stubbornly by Maddalena Castello with the very important and decisive help by Juan Oviedo, is participating in this event with some girls lent as Aurora Mion, from Montecchio Precalcino, Francesca Maniero, from Scandiano, Elizabetta Lorenzato, from Montebello, and the athletes coming from his youth sector like Alice Sartori and Veronica Viki Caretta which, together with the veteran Elena Toffanin increased from Sandrigo to Breganze, were present with Italy at the recent world championship in Chile. Alice Sartori and Veronica Viki Caretta are strengths of the Breganze under-17 men’s team or, as in the case of Elena Toffanin, Serie B, demonstrating that the girls know very well disengage in this discipline.

To these are added to this event three other girls coming respectively from Agrate, from Lodi and from Valdagno, namely Alessia Villa, Beatrice Marchesi and Chiara Cestonaro.

This sport in Breganze has had an important past: there are five league titles and two Italian cups that the girls have won.

So the Hockey Breganze, with his President Antonello Turle and his vice president Stefano Volpe and all his collaborators, strongly believes in the “pink side” of the sport.

And this tournament proves it.

Appointment then at Palaferrarin Breganze, 15 to 18 December 2016, for the days of competition of this “Toni Battistella Cup”.