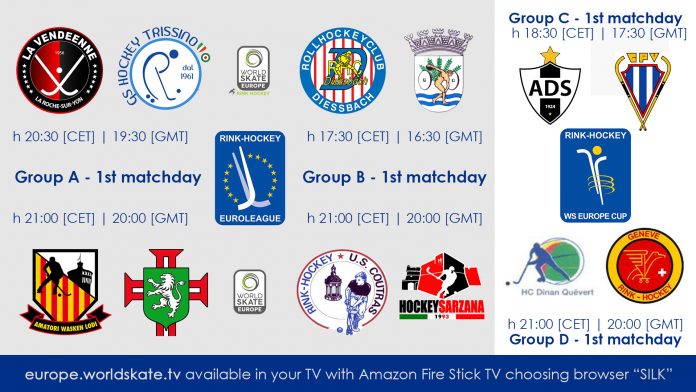 Tomorrow European hockey returns to the rink, after 20 months from the last qualifying match of a group phase, after 4 months from the last game of the WS Europe Cup. It has been a summer full of turn of events and changes in the European scenario, but in the end, many European clubs have confirmed their presence albeit in the midst of many difficulties due to the persistence of the pandemic, although with fewer problems than just one year ago, when the competitions were suspended until December 31 and then rebuilt again with the remaining teams.
It will be an equally difficult new European season but both the Euroleague and the WS Europe Cup are ready to start. Completely revised format for the WS Europe Cup compared to the past, with more matches for everyone and formula similar to the Euroleague, a group phase and then quarterfinals. Tomorrow the first four games: two played in France Poire will challenge the three-time champions of the event the catalan Lleida and the challenge in Dinan between Quevert and Geneve; one will be played in Portugal, one of the most anticipated matches, Sanjoanense-Voltregà, a rookie and a veteran; Igualada-Valdagno, two historic European clubs compared for gain points in the group. The Euroleague, on the other hand, without the 12 clubs that withdrew the day before the draw on September 12, remained with eight clubs that will compete for the coveted trophy arrived at the 57th edition. Tomorrow two races will be played in France. Trissino, first in the standings in Serie A1, will go to La Vendenne, while the other Italian Sarzana, will be a guest of Coutras. The return of Valongo to Europe with the debut on the swiss rink of Diessbach, while the highly anticipated Lodi-Tomar closes the program, one of the most important matches of this Euroleague 2021-22. All Euroleague matches will be broadcast live on europe.worldskate.tv as per new European provisions and most WS Europe Cup matches will be live on the same site (details below). In most games, there will be the Livescore online, while for all the official results we recommend consulting our specific sites www.wseurope-rinkhockey.org/euroleague and www.wseurope-rinkhockey.org/wseuropecup and in our Twitter account WSERinkHockey. In the following days, all the statistics and official reports of all the games will be inserted into the websites