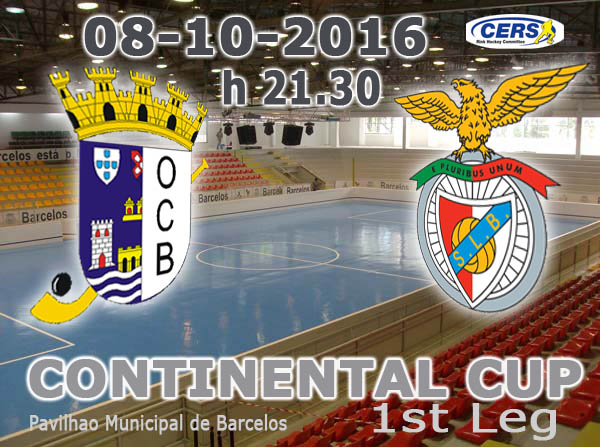 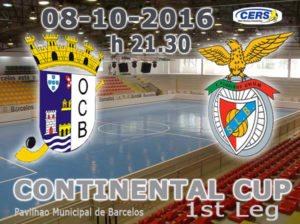 Saturday night, at 9.30 PM WET, the winners of the last Euroleague and Cers Cup will be in Barcelos for the first leg of the Continental Cup.

The season of the European Rink Hockey Cups is ready to start. As usual, the opening act will be the two games that will assign the Continental Cup between the winner of the last season Euroleague and Cers Cup. After that, a long series of 137 games will follow, from November 2016 till May 2017, and dozens of clubs from Austria, France, England, Germany, Italy, Portugal, Spain and Switzerland will play for the 2016/17 titles in Male and Female Eurocup and Male Cers Cup.
This year, the Continental Cup is a Portuguese derby between SL Benfica (Euroleague champion) and OC Barcelos (Cers Cup winner). The first leg will be played on Saturday 8th in Barcelos and the second one on Saturday 15th in Lisbon.
The referees appointed for the first-leg game are Francisco Garcia and Ruben Fernandez from Spain. The start time of the game is at 9.30 PM WET (Portuguese local time).
It is possible to view the live score of the match following this link.
The second-leg match on next Saturday will be broadcasted live both on the portuguese chain TVI24 and streamed to the net by CERH TV starting from 5.00 PM WET. The production of the event will be made by Wall Street .