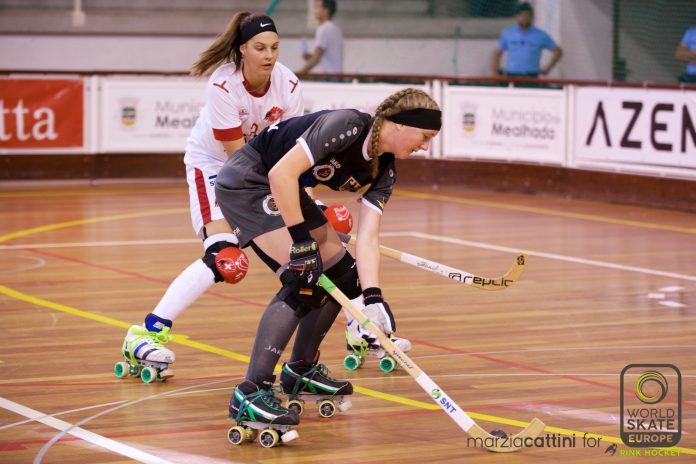 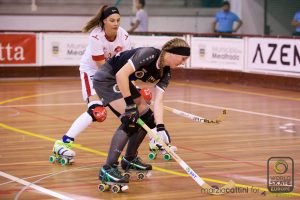 Spain and Portugal remains both in the first position and they grew their advantage from Italy. Spain win easily against England (20-0) and Portugal has the best in the game with Italy (5-0). Germany conquers the first victory against Switzerland (4-1)-

In next hours, at 17.00h (18.00 CET) the decisive match for the bronze medal Italy-France, live coverage on MediaSport Channel (814 Sky Italy, Free to Air Satellite Hotbird 13E): if Italy will win in this game they will gain the bronze medal, instead also France and Germany could be reach the third position in the last day. At 19.00 (20.00 CET) Spain will return in the rink against Germany and then at 21.00 (22.00 CET) Portugal-Switzerland. If they will win both, they will fight on Saturday at 21.00 (22.00 CET) for the title. All the three matches will be live on our WEBTV www.cers-rinkhockey.tv

Italy reached the victory only in the second half after a partial of 1-2 after 30 minutes after the 2 goals of Ghirardello and one for McCarthy. Italian teams grew up their scores in the last 15 minutes with 5 goals after they have created more than 100 shots. 4 goals for Galeassi, 3 for Ghirardello the final count of this game. Italy temporaly raise up in the standing in the third place.

Germay won the important match against Switzerland for 4-1. Germans scored the first goal after few second from the start with Franziska Neubert and then the second with Larocca. The opponent team tried to reduce the gap but Behrens saved many shot. Hartje scored again the second half in penalty shot and her teammates have controlled the game until the latest minutes. Moor centered the first goal, and then Larocca in direct shot block the score 4-1. Tomorrow Germany will play against Spain and Switzerland against Portugal

Easy victory of Spain: after 4 seconds reached the first goal then a long monologue. 4 goals for Maria Diez, 3 Natasha Lee, 2 for Busquets, Sara Gonzalez, Puigdueta, 1 for Gonzalez, Barcons. Another victory for a total 12 points and +43 of goal average.

Portugal won another game against Italy for 5 a 0. An equal match until the 15th minutes of the first half, then the first goals scored by Silva in powerplay situation. Before that 1 direct shot failed for each team from Tamiozzo and Sousa. Portugal made the double at minute 21 thanks to a lucky rebound in center of the area for Ines Vieira’s goal. In the second half Portugal grew up its score thanks to 2 counterattack of Silva and Ferreira. Italy tried many times to re-enter the game before the 4-0 but the italian girls failed many preciuos opportunity. In the final minutes Ferreira scored another goal in penalty shot. Portugal remains in the first position and in this evening will try to remains near Spain for the final day. Italy will play the most importanti game of the day at 17.00h against France for the bronze medal.

You can download in PDF the Official Preview of the 14th Female European Championship -> https://www.wseurope-rinkhockey.org/wp-content/uploads/2018/presskit_mealhada2018.pdf