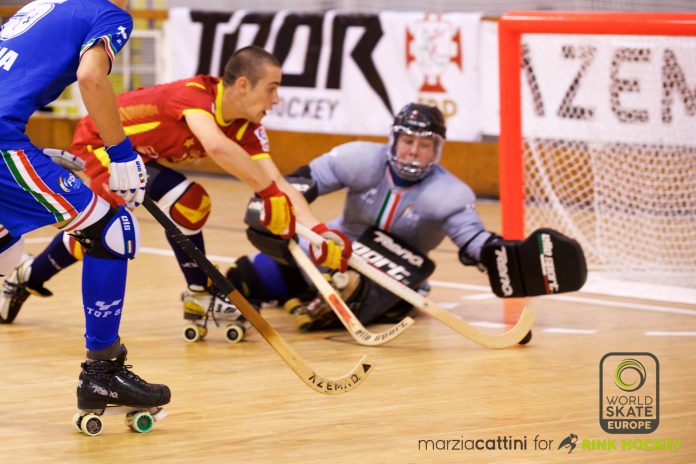 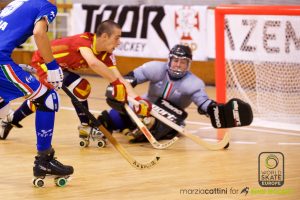 The final for the gold medal will be decided only on tomorrow night at Pavilhao Monserrate of Viana do Castelo. Today Italy was beaten from a great Spain with a clearly result of 7-4, after a sensational first period of 6-0, the best 25 minutes so far. Italy will have the chance to reach the final for the gold medal for the second consecutive time, if they win against Germany. Portugal today won against Switzerland (7-1): tomorrow in the “El Clasico” of Rink Hockey, they will need of a victory with more than 3 goals against Spain. It will be expected the big crowd for this decisive match of the tournament: Portugal will need of the best match for confirming at the top of the standing for the six consecutive time. England-Switzerland will be the first of two finals for the last positions of the ranking.

Good first half for England with a solid 4-4, thanks to the hat-trick of Oldroyd. Germany in the second half played better with more efficient attacks. Best scorer Max Thiel with 5 goals (now on the top5 of the tournament), 3 for Ober. Germans raised up in the standing until the fourth place (6 points): tomorrow could be more difficult against Italy but they probably will fight for the bronze medal. England will play tomorrow against Switzerland for first of two final against them.

Spain won clearly against Italy thanks to a sensational first 25 minutes with a score of 6-0: one of the best moment so far of this tournament. Domenech and Joseph tbe best player of the match, quickened spanish attacks and has surprised the italians. Italy after a infernal first period, tried to return in the match, and in the last 10 minutes scored 4 goals with Compagno, Nadini and Ardit, that has saved the italians from a big crush after the precious victory against Portugal. Tomorrow they must win against Germany for reaching the second consecutive final for gold medal. Spain instead will face against home team with 3 scored available for reaching the final: win, draw or lose less then 3 goals.

Portugal returned to the victory against a square Switzerland. First period very concentrated for home team: 5-0 the score with the goals of Ramos (2) and Trabulo (2). Switzerland tried to score in many attacks and they has centered the goal with Althaus in penalty shot. 7 to 1 for Portugal, with the best defense in this tournament (7 goals suffered). Tomorrow the biggest match of the qualification round: the “Clasico” Iberian Derby Portugal-Spain. They will have needed of a great atmosphere at Pavilhao Monserrate for reaching the final: Portugal needs to win and score at least more than 4 goals to Spain. Switzerland instead will play two finals against England for reaching the fifth position.