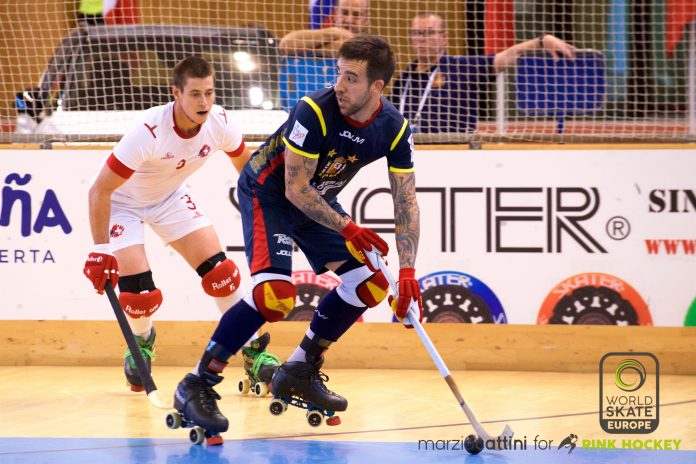 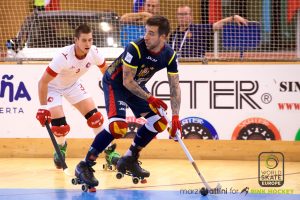 The quarterfinals of the Male Senior European Championship ongoing in A Coruña (Spain) gave clear verdicts today: France, Italy, Spain and Portugal got qualified to the semifinals of tomorrow night and are still in the run for the title.
Those four teams also got the right to be in the group A and B at the World Roller Games in Barcelona in 2019 where Europe will have four places (on eight) in the main competition (group A and B), four more in middle-level competition (group C and D), while others team will play in groups E and F.

France was the first team to qualify for the semifinal, winning in the morning against Germany in a quite balanced game where the French team tried to save as many energies as possible.
Andorra made id difficult to Italy during the first half. Italy went ahead 2-0 in less than a minute but didn’t succeed to close the game until the middle part of the 2nd half.
Spain and Portugal, on the contrary, obtained large victories against Switzerland and England and went easily into the semifinals.
In the first game of the group for the 9th/11th places, Austria and Belgium draw 4-4.

SEMIFINALS
Tomorrow, Saturday 21st, after the 2nd game of the group for the 9th/11th position between Netherland and Belgium (10 AM), the semifinals for the 5th to 8th places are scheduled. England will face Andorra and Switzerland will play against Germany.
Starting from 8 PM the Championship will enter its hottest phase with the two semifinals for the title. The first game scheduled is Spain-France, followed by Portugal-Italy at 10 PM. It’s really impossible to foresee which teams will be the finalist on Sunday because every team has the possibility to win this European Championship.