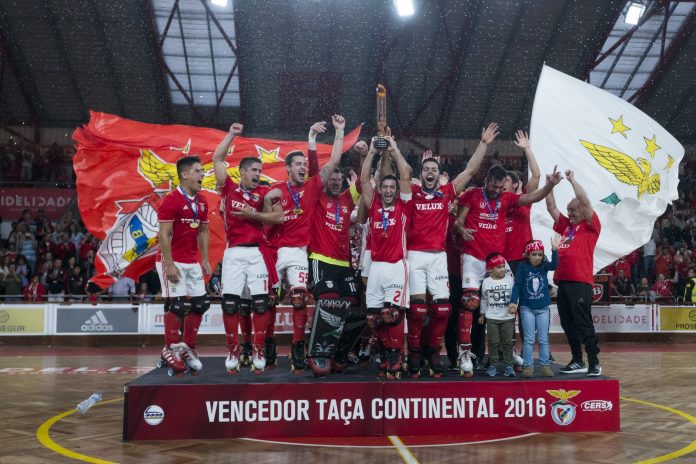 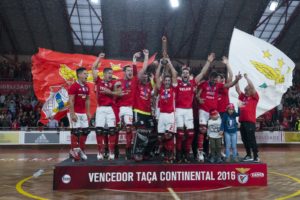 In the 2nd leg of the final, the Lisbon team overturned the result getting a clear victory by 9-2. For SL Benfica is the 3rd time in this competition.

SL Benfica has been the last team to win a European Cup in the last season and is the first in this one. The white-red team raised the Continental Cup in the “Pavilhao Fidelidade” after a stunning victory against OC Barcelos that won the 1st leg 5-4. In the 2nd leg the supremacy of SL Benfica has never been questioned. The team coached by Pedro Silva won 9-2, achieving the come back in the 1st half and completing the task in the 2nd.
Argentinian Carlos Nicolia made the assists for the first and second goals of SL Benfica scored by Joao Rodrigues and Jordi Adroher. OC Barcelos bridged the gap thanks to Joao Guimaraes, after that Luis Querido failed a direct shot. During the last minute of the 1st half, an amazing goal by Joao Rodrigues let Benfica to end the period 3-1 ahead.
The home team conquered the Continental Cup in the first five minutes of the 2nd half. Tiago Rafael scores just 20 seconds after the beginning; then, Barcelos failed its second direct shot and, during the powerplay followed to the blue card to Adrhoer, suffered the 5-1 and 6-1 both scored by Joao Rodrigues. With an advantage of 5 points, Benfica spent the 2nd half controlling the match until its end.