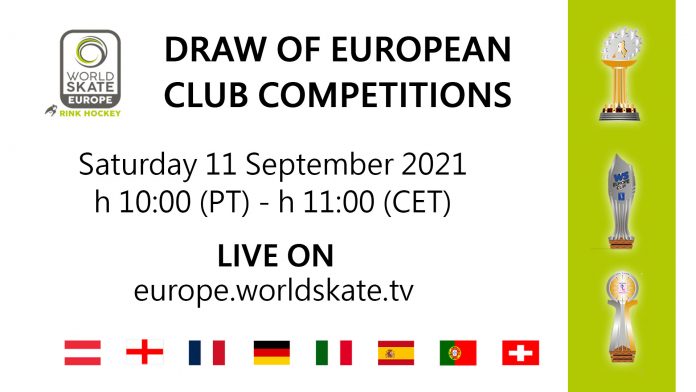 The Rink Hockey Technical Committee of World Skate Europe has received today the retirement of 12 clubs in the Euroleague. The competition will be held with the remaining 8 teams. Tomorrow at 10.00 (GMT) 11.00 (CET) will be drawn the three European competitions in the Pavilhao Multiusos de Paredes (Portugal) in live streaming europe.worldskate.tv

EUROLEAGUE
8 teams are registered in the competition
Portugal: SC Tomar, AD Valongo – Italy: Amatori Wasken Lodi, GSH Trissino, H.Sarzana – France: La Vendeenne, US Coutras – Switzerland: RHC Diessbach
First phase of the qualification is based on 2 groups of 4 teams. After a double way round from October to April, the best two classified in the groups will be qualified to the the Final Four (14-15 May)

FEMALE LEAGUE CUP
10 teams are registered in the competition
Spain: Generali HC Palau, CP Voltregà, Martinela CP Manlleu, Telecable HC Gijon, Cerdanyola CH – Portugal: SL Benfica, AD Sanjoanense – France: CS Noisy Le Grand, US Coutras – Italy: Roller Matera
2 groups of 5 teams, with only a round played (2 matches at home, 2 matches away), will define the best two of every group for the Final Four. The group phase will start at the start of January (day 8) and will finish on April 2. 30 April and 1 May are the days when the Final Four is scheduled.

Further information will be delivered in the coming weeks and detailed information are written in the Official Communication.